HCU students who receive a Bachelor of Science in Electrical Engineering are ready to work with many types of employers nationwide to research, design, develop, test or supervise the manufacturing and installation of electrical equipment, components or systems for commercial, industrial, military or scientific use. Students at Houston Christian University receive excellent classroom learning and hands-on experience in labs and internships to be prepared for successful careers.

According to O*Net Online, which is sponsored by the US Department of Labor, Electrical Engineering career paths reflect a range of job titles. Here’s a sample:

Overall employment is projected to grow nine percent through 2026, about as fast as the average for all occupations, reports the US Bureau of Labor Statistics (BLS).

The rapid pace of technological innovation will likely drive demand for jobs in research and development, an area in which engineering expertise is needed to design distribution systems related to new technologies. Electrical engineers will play key roles in new developments with solar arrays, semiconductors and communications technologies. Additionally, electrical engineers may play a role in assisting with the automation of various production processes.

Various types of Electrical Engineering jobs are available throughout the country in many diverse locations. Electrical engineers are in demand across a variety of fields. The most common is in engineering services, followed by electric power, and research and development. 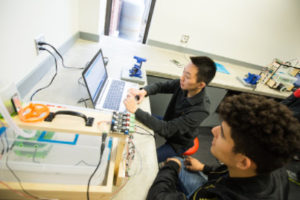 Electrical engineers held about 183,370 jobs in 2017, reports the BLS. HCU students who choose an Electrical Engineering major will be ready to work in process control, network security, electrical distribution and other engineering-related positions. HCU Electrical Engineering graduates will be ready to design the next generation of electronic and control devices to ensure that better security measures can be built into the devices during production and before utilization and operation begin.

Industries with the highest level of employment of electrical engineers include:

Electrical engineers work on a variety of projects, ranging from computers, robots, cell phones, cards and radar to navigation systems, wiring and lighting in buildings, and other kinds of electrical systems. Such projects often start by defining what new electronics should be able to do. Electronic engineers will then design the circuits and parts of the electronics using a computer. Electrical engineers create a prototype and test the product to improve it. Most products do not work initially or have some bugs that need to be fixed. The electrical engineer needs to figure out the problem and make the product work.

Texas is #2 nationwide with the highest employment of electrical engineers.

Electric Engineer Jobs and Compensation: A Range of Employers and Locations

Texas is one of the top five states with the highest employment of electrical engineers in the U.S., reports the BLS. These five states include the following with their respective median EE salaries:

According to the BLS, top-paying industries for Electrical Engineering jobs, along with average salaries, include:

Renewal of Grace Hopper Scholarships for Science and Engineering students