Universities in the Midst of the Whirlwind

Many universities have lost the ability to organize themselves around a unifying purpose or a singular vision for human life and society. But this incapacity has not diminished their immense cultural influence. Universities retain great cultural power, but they sometimes wield this power chaotically, with no constructive purpose. Their impact is significant and undeniable, but it often resembles the scattered wreckage left in the wake of a hurricane rather than the refuge of wisdom that is needed in the midst of the storm, the respite to be found in the good, the true, the just, and the beautiful. 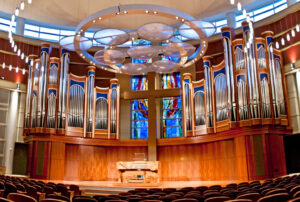 Thus, many universities end up serving especially, if not solely, to provide credentialing and networking, often sustained largely by athletic enthusiasm. In these instances, university values are too selective, relative, and subject to cultural whims. For some, the institution’s only unified purpose is as an economic engine for the given state in which it resides. For others, the university’s mission appears more oriented to teaching and training for political activism around prescribed and, thus, limited points of view. This latter role tends toward utopianism and often leads to the suppression of contrary perspectives, promoting a uniformity of speech and behavior achieved by social pressure and even force, not evidence and reasoned debate. Such patterns of intellectual coercion are at odds with the long history of universities and their purposes.

The Christian university is a different kind of university. It is not one that has added a few religious practices (chapel, for example) or a few extra courses (Bible and theology) to an otherwise standard curriculum. As Richard John Neuhaus has argued, “There is no such thing as a university pure and simple.”[i] All universities have a character, a personality, and a culturally conditioned identity. No university, however, should fail to promote the good faith engagement of discovery, research, creativity, writing, speaking, and new ideas. Such failure not only leads to authoritarian practices and dishonest outcomes—as may be seen historically when the interests of power or money control the voices of free speech and righteous learning—but it also lacks the necessary humility required for doing discovery, teaching, and all the practices of thought and dialogue that are at the core of the university experience and purpose.

The Christian university shares these commitments to humble truth seeking and does so with the grounding of historically distinctive core convictions. A Christian university is a certain kind of university, whose belief that Jesus Christ is Lord over all things, visible and invisible, reflects theological givens but in no way suppresses the institution’s ability to look at all of reality. Indeed, our convictions support and encourage the investigation of the world around us, as well as ordered methods to understand it. We desire as a Christian university to be a witness to and a preserving influence for the functions historically common to all universities properly so called.

Next:  Scripture and a Christian Worldview »