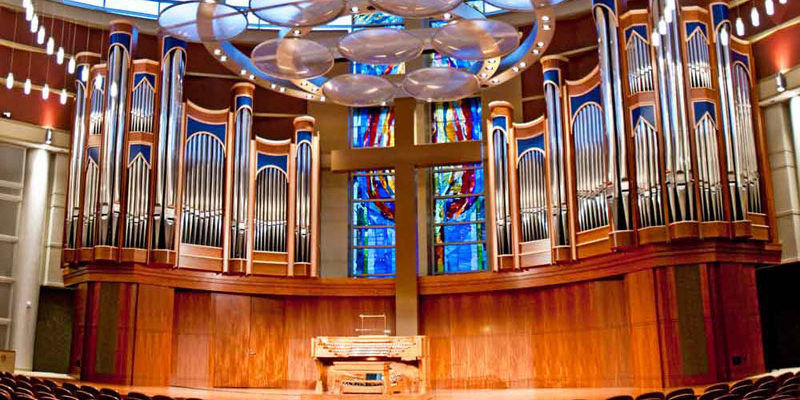 The Smith Organ in Belin Chapel

Houston Christian University is pleased to showcase a Létourneau pipe organ. This instrument was made possible by the generosity of Sherry and Jim Smith. The 57-stop, 58-rank instrument is housed in the Belin Chapel of the Morris Cultural Arts Center. Each year, the Department of Music presents an Organ Recital Series that is free and open to the public.

Létourneau Limitée, a Canadian organ builder, hand-crafted 3,261 pipes and thousands of moving parts during a two-year period to create this instrument and its exquisite sounds. The mechanism features a stunning console with three keyboards, a pedalboard, two blower motors and more than 3,200 pipes. The Smith Organ in Belin Chapel is a powerful testimony to the time-honored tradition of custom organ-building.

This extraordinary instrument, conceived on a grand scale and enhanced by its stunning display of pipes, has won rave reviews by many featured concert artists. The instrument was further distinguished when it was selected as a featured instrument in the 2016 American Guild of Organists National Convention.

Pipe organs enhance the most stunning cathedrals and chapels around the world. Composers such as Johann Sebastian Bach, Felix Mendelssohn, Charles Maire Widor and Olivier Messiaen created music masterpieces for the organ, and for centuries, congregational singing has been inspired by well-played hymns.

HCU waited 40 years for a chapel, and almost as long for a pipe organ. Installed in 2009, the Smith Organ has fulfilled this dream. The result is a beautiful place of worship and performance with a magnificent instrument that will inspire generations with its breathtaking façade and glorious sounds.

Attend a performance on the Smith Organ

Learn more about the Smith Organ