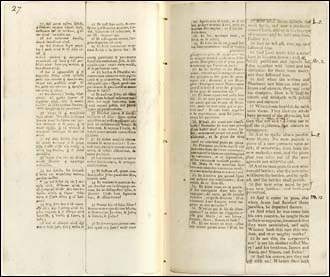 Thomas Jefferson believed that the ethics of Jesus were the best in the world, but he did not believe Jesus was God or divine. He wrote his friend Benjamin Rush, “I am a Christian, in the only sense he [Jesus] wished any one to be; sincerely attached to his doctrines, in preference to all others;ascribing to himself every human excellence; and believing he never claimed any other.” Jefferson believed that the New Testament was written by unlearned apostles who often misunderstood Jesus and misrepresented his teaching. Towards the end of his life, Jefferson went through the New Testament and put together in parallel columns, by cutting and pasting from printed New Testaments, extracts from the Greek, Latin, French, and English texts of the Gospels which he thought best expressed what Jesus really taught. In many ways, Jefferson’s approach was a forerunner of that used by the modern Jesus Seminar. As historian Daniel Boorstin noted, Jefferson “had projected his own qualities and limitations into Jesus.” Jefferson collected the “Life and Morals” for his own private use and it was known only to a few close correspondents. When the U.S. government acquired Jefferson’s papers, some interest began to develop in what became known as the “Jefferson Bible.” Congress ordered this printing of 9,000 copies for the use of Congress: 3,000 for the use of the Senate and 6,000 for the use of the House.