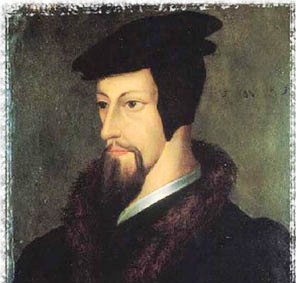 July 10, 2009, marked the 500th anniversary of the birth of John Calvin, who was born in Noyon, Picardie in France in 1509.  The reformation Calvin directed in Geneva had a world-wide impact, with Calvin’s ideas spreading in Europe, crossing the channel to England, and finding a firm footing in America.  Historians have seen Calvin’s influence in the development of capitalism, representative democracy, and individual liberty.  Nineteenth century historians Leopold von Ranke and George Bancroft, among others, considered Calvin and his ideas indispensable to the establishment of the United States.

The foundation of Calvin’s ideas, theology, and writings was the Bible.  Like Martin Luther and the other Reformers, Calvin held that the Scripture was the Christian’s authority for truth. Calvin’s theology is thoroughly biblical, unlike the scholastic theology of his day or the thinking of rationalistic philosophers.

Several items in the Dunham Bible Museum collection are either by Calvin or reflect his influence. 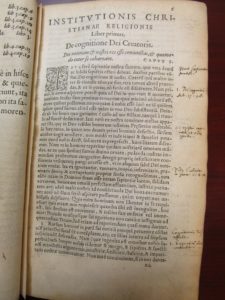 John Calvin first published his Institutes of the Christian Religion in 1536.  In ensuing years, after his move to Geneva, he expanded the work. Though Calvin revised and greatly expanded the Institutes in the next twenty years, his emphasis throughout on the Bible’s authority remained constant.  Calvin stated, “My object in this work is to prepare and train students of sacred  theology for the study of the Word of God that they might have an easy access into it and be able to proceed in it without hindrance.”

In the Institutes, Calvin made the Scriptures the source of his comprehensive theology.  He exhorted, “Let us not take it into our heads either to seek out God  anywhere else than in his Sacred Word, or to think anything about him that is not prompted by His Word, or to speak   anything that is not taken from that Word.”

Calvin’s ideas had a tremendous influence not only on theology and the life of the church but on education and government.

Bezae Codex Cantabrigiensis, Being an Exact Copy, in Ordinary Type, of the Celebrated Uncial Graeco-Latin Manuscript of the Four Gospels and Acts of the Apostles, Written Early in the Sixth Century, And Presented to the University of Cambridge by Theodore Beza, Ed. Frederick Scrivener. Cambridge & London: Deighton, Bell, and Co., 1864.

During the religious wars in 1562, when the city of Lyons fell to the French Huguenots, a New Testament manuscript was discovered in the monastery of St. Irenaeus.  This early manuscript, dating from the 4th-5th centuries, came into the hands of Theodore Beza, who gave it to the University of Cambridge when he went to England in 1581. Accordingly named Codex Bezae Cantabrigiensis, the manuscript is one of the five most important Greek New Testament manuscripts and includes the Gospels and the book of Acts.  The text was in both Greek and Latin, though not the Latin Vulgate translation.  This printing of the text in ordinary type was done in 1864. 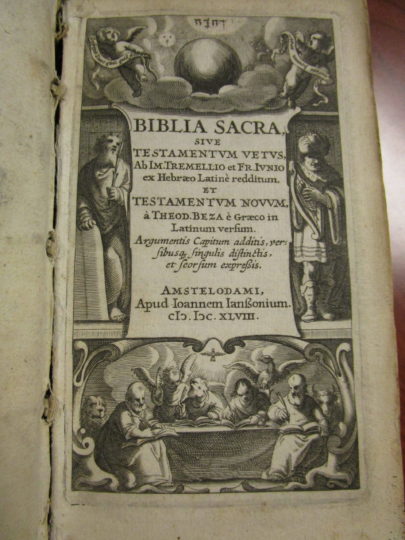 Biblia Sacra was the standard Latin biblical text used by Reformed scholars from 1579 through 1764 and reflects the scholars who congregated with Calvin at Geneva. There were at least 30 different editions of this Bible published in 6 academic centers  – London, Amsterdam, Geneva, Frankfurt, Hanover, and Zurich.  This 1648 edition was printed at Amsterdam and bound in vellum.

Theodore Beza (1519-1605) was Calvin’s successor in Geneva.  He was a leading Greek scholar and first rector of Calvin’s Geneva Academy, where he also taught Greek and theology. In 1556 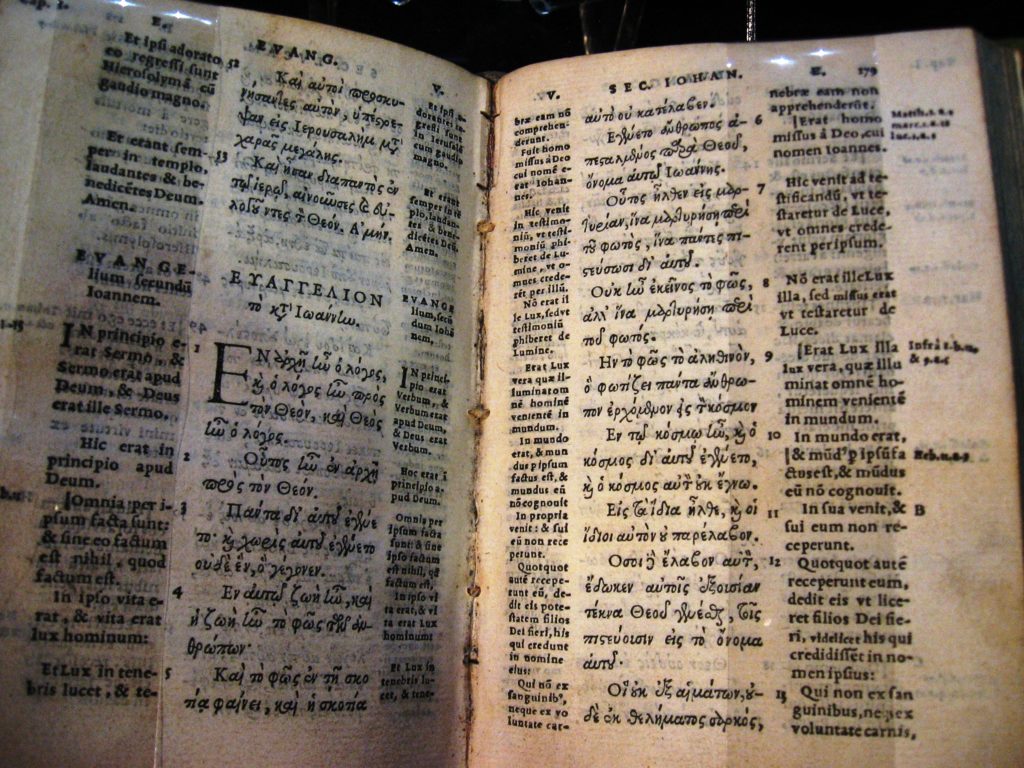 Non-conformist minister Philiup Doddridge said of Beza: “Beza is undoubtedly the best critic on the Greek language of any commentator we have.  There is no translation that I know of equal to his: and his remarks on Erasmus and the vulgar Latin are wrought up to the utmost degree of exactness.  On the whole, it is an invaluable treasure, and deserves to be read with the utmost attention.” 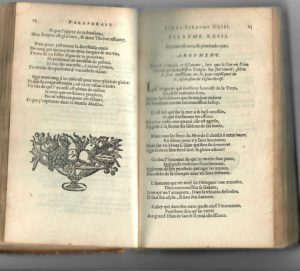 Calvin called the Bible’s psalms, “An Anatomy of all the Parts of the Soul,” recognizing that the book reflected every human emotion.  In the psalms he believed the Holy Spirit had “drawn to the life all the griefs, sorrows, fears, doubts, hopes, cares, perplexities, in short, all the distracting emotions with which the minds of men are wont to be agitated.” In other parts of the Bible, God spoke to men, but in the psalms the prophets spoke to God, and drew later readers to examine their own souls.

Calvin encouraged the Christian singing of the psalms, and as early as 1539 had a psalter published in Strassbourg.  He tried his hand at poetic paraphrases of the psalms, but also incorporated the French psalm translations of Clement Marot into the Geneva Psalters.

The Newe Testament of our Lord Jesus Christ. Conferred diligently with the Greke, and best appeared translators at Geneva.  Geneva: Conad Badius, 1557.

When she came to the throne, Queen Mary reversed Edward’s Protestant reforms and aligned the Church of England 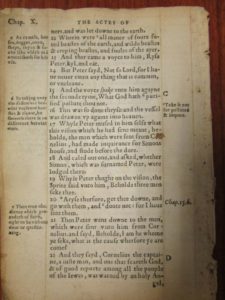 once again with Rome. The Bible in English was again forbidden. During Queen Mary’s brief reign, almost 300 English Protestants were executed, earning her the nickname “Bloody Mary.” To avoid persecution, many Protestants fled to Europe, especially to the city of Geneva. While there, they began work on what became the Geneva Bible, first published in 1560.

William Whittingham, pastor of the English congregation at Geneva during Queen Mary’s reign and John Calvin’s brother-in-law, translated the New Testament from the Greek, though he largely followed Tyndale’s translation.  The Testament had to be smuggled into England. This is one of only seven known remaining copies.

Calvin’s New Testament preface to the French Bible, “Christ is the End of the Law,” was translated into English and placed as the preface to the Geneva New Testament published in 1557.  The preface had been one of Calvin’s earliest works after his conversion.  Calvin’s cousin, Pierre Robert Olivetan, had been chosen by the Waldensians to translate the Bible into French from the original Greek and Hebrew (an earlier French translation had been from the Latin Vulgate).

When Olivetan’s Bible was published in 1535, the newly converted John Calvin wrote a Latin preface to the New Testament.  Beginning with Creation, Calvin traced the working of God in history through the redemption brought by Jesus Christ. The point of the entire Scripture was, ” truly to know Jesus Christ, and the infinite riches that are comprised in him and are offered to us by him from God the Father.  If one were to sift thoroughly the Law and the Prophets, he would not find a single word which would not draw and bring us to him. ”  In the Scripture, “is enclosed all the wisdom which men can understand, and ought to learn in this life, which no angel, or man, dead or living, may add to or take away from.

Calvin concluded his preface by praising the Bible in the vernacular language and excoriating the rulers and bishops who tried to keep the Scriptures from the people.

The Geneva printing of the English New Testament included innovations which were later incorporated in the complete Bible printed at Geneva in 1560. These included division of the text into verses, the use of Roman type and the use of italics for words not specifically in the Greek.

The Bible / translated according to the Ebrew and Greeke, and conferred with the best translations in diuers languages; with most profitable annotations vpon all the hard places, and other things of great importance.  London: Christopher Barker, 1560. The Bible translation begun in Geneva under Queen Mary I was completed and published in the early reign of Queen Elizabeth I. It was the first English Bible to be translated entirely from the original languages of Hebrew, Aramaic, and Greek. The Geneva Bible was designed to be read by ordinary individuals. It was published in a smaller size and at a moderate price. Notes were added to explain difficult passages.

Sometimes the Geneva Bible is called “the Breeches Bible” because Genesis 3:7 is translated “and they sewed fig tree leaves together and made themselves breeches.” For three quarters of a century it was the household Bible for many English-speaking Protestants. It was the version used by 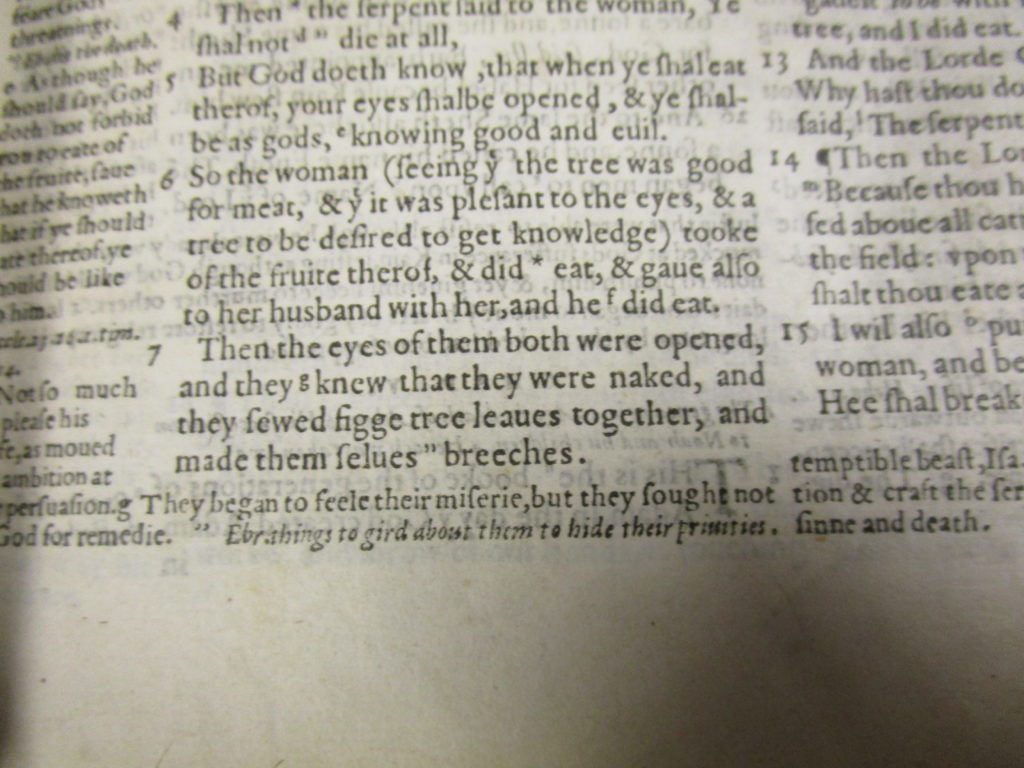 Shakespeare, John Bunyan and the earliest settlers in America.

The Bible, That is, the holy Scriptures conteined in the Olde and New Testament.  London: Christopher Barker, 1599.

The 1599 Geneva Bible included the revised New Testament by  Laurence Tomson and the Junius notes on Revelation.  This edition, and those following based upon it, included the most extensive set of notes in the many Geneva editions.  It also included a table of the    interpretation of proper names in the Bible, a table of principle subjects in the Bible, the Book of Psalms in metre by Thomas Steinhold and John Hopkins, and morning and evening prayers by  English congregations. 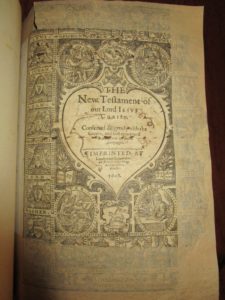 This beautifully-written manuscript of the New Testament was prepared by Charles Wheeler, a bookseller in Worcester, Mass achusetts. Wheeler’s manuscript is Laurence Tomson’s revision of the Geneva translation of Theodore Beza’s Greek New Testament . It was often used in Geneva Bibles printed after 1576. Laurence Tomson was Secretary to Sir Francis Walsingham (the Elizabeth’s Secretary of State).  Tomson had been a lecturer in Hebrew at Geneva.   Why Charles Wheeler made this manuscript is not known. 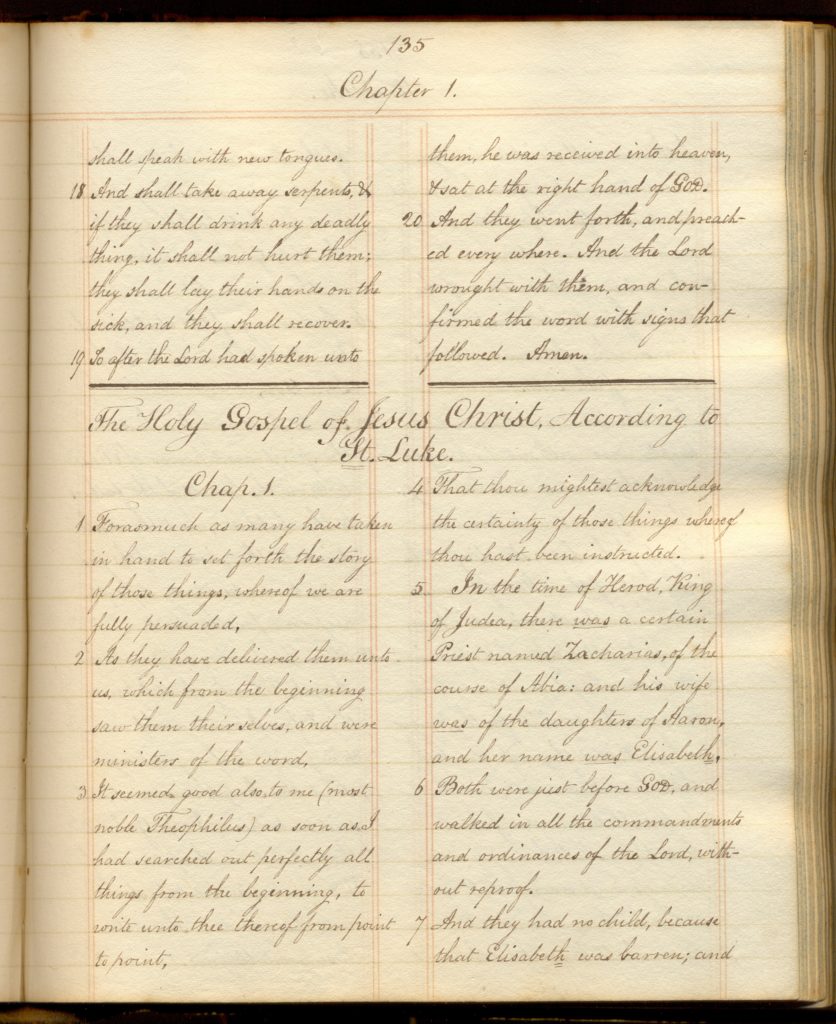 The singing of psalms has characterized the reformed churches  under Calvin’s influence, including those in America.  Influenced by Calvin’s emphasis on the singing of psalms, puritan ministers in Massachusetts  made a versification of the psalms in English in 1640.

This Bay Psalm Book was the first book written and printed in the    American colonies . The printing was just 20 years after the Pilgrims  landed at Plymouth and 10 years after the Puritan migration. The first      printing press in New England was purchased and imported specifically  to print this book. It went through numerous editions and was used in      churches for more than 100 years. The translation of the Psalms into English poetry was prepared by a group of 30 clergymen. 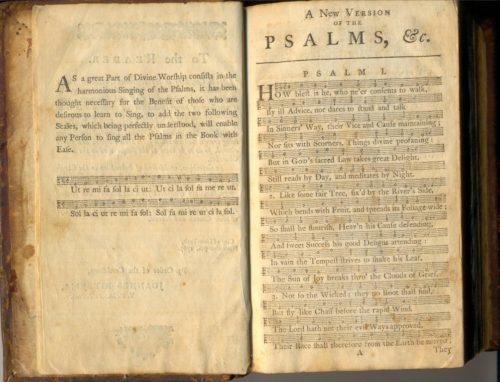 The Psalms were the only songs sung in many colonial churches. This volume is the earliest American book to contain extensive use of music printed from type. The type for the music was obtained at considerable cost from a press in Amsterdam. Francis Hopkinson, who put the psalms into verse form, was an author, song-writer, and a signer of the Declaration of Independence.

The True Psalmody: or the Bible Psalms, the Churche’s Only Manual of Praise.   Philadelphia: William S. Young, 1859. 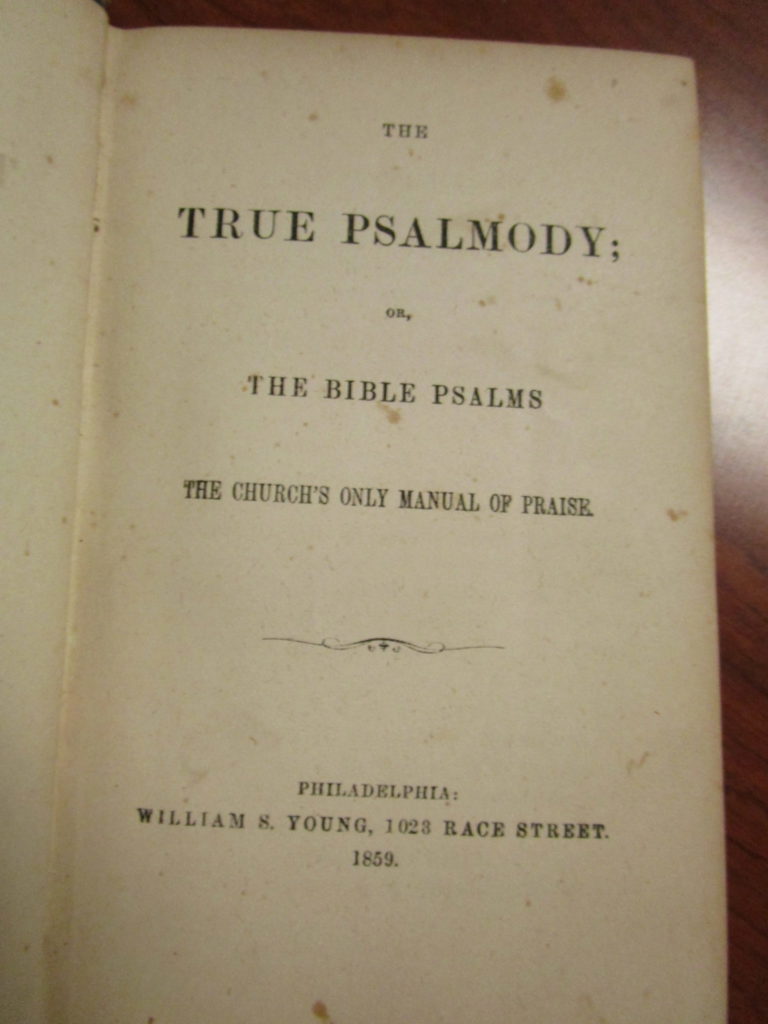 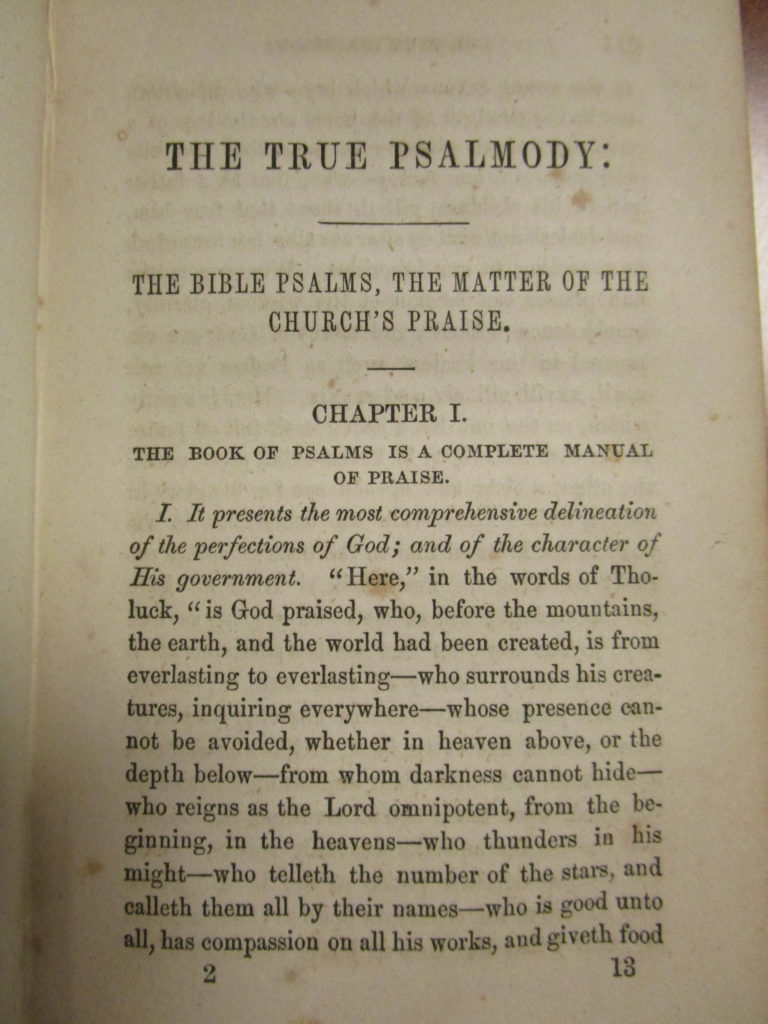 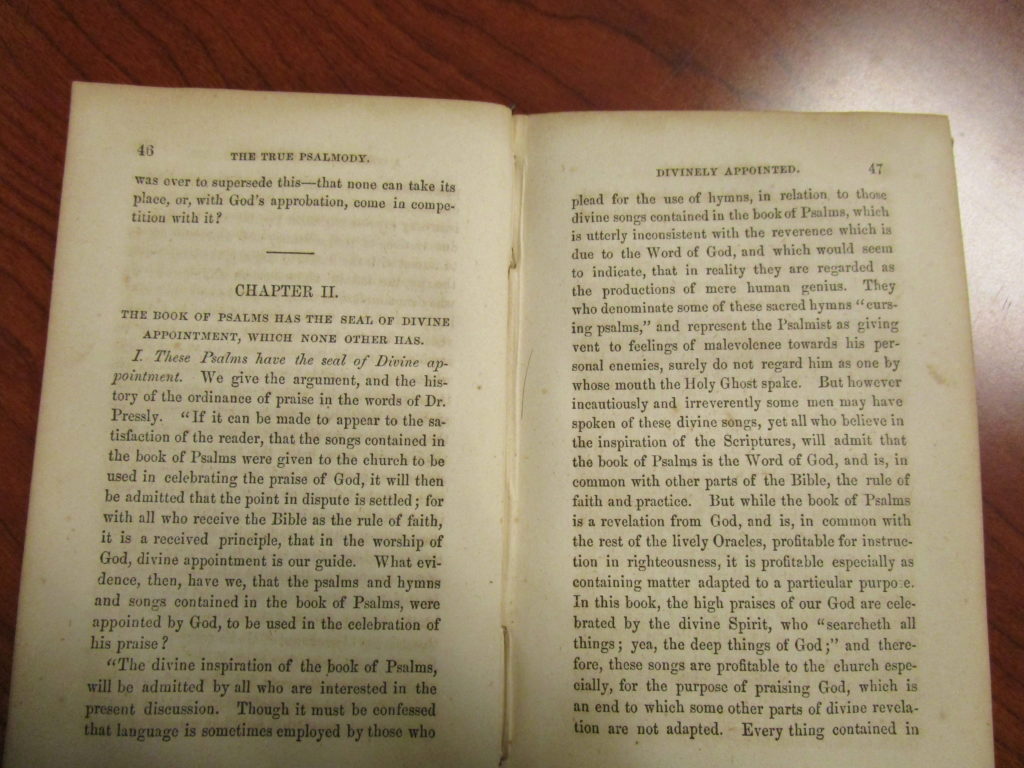