Picturing the Word
Bible Illustrations from the 15th -16th Centuries

Biblia Pauperum was a “Bible” designed for use by poor priests, or travelling Franciscans, in teaching the people.  The books were first produced in manuscript in the 13th century, but by the 15th century were being printed as block books.  Block books, printed from carved wood blocks, usually consisted of about 50 leaves.  Each leaf consisted of both pictures and text, all carved from one wood block.

Woodblock prints were very much like coloring books and were designed to be colored in by hand.  The colored illustrations of Biblia Pauperum shown here are a facsimile edition of the forty-leaf blockbook in the library of the Esztergom Cathedral in Hungary. The uncolored leafs are a facsimile of the British Library’s Biblia Pauperum. Each date from c. 1450. The central New Testament scene is the women meeting an angel at the empty tomb when they come to embalm Jesus’ body: The Center New Testament figure is Christ appearing as a gardener to Mary Magdalene. The words of the bottom prophets are from Deuteronomy 32:11 (“As an Eagle stirreth up her nest, fluttereth over her young,”) and Micah 2:13 (“for he shall go up that shall open the way before them.”). 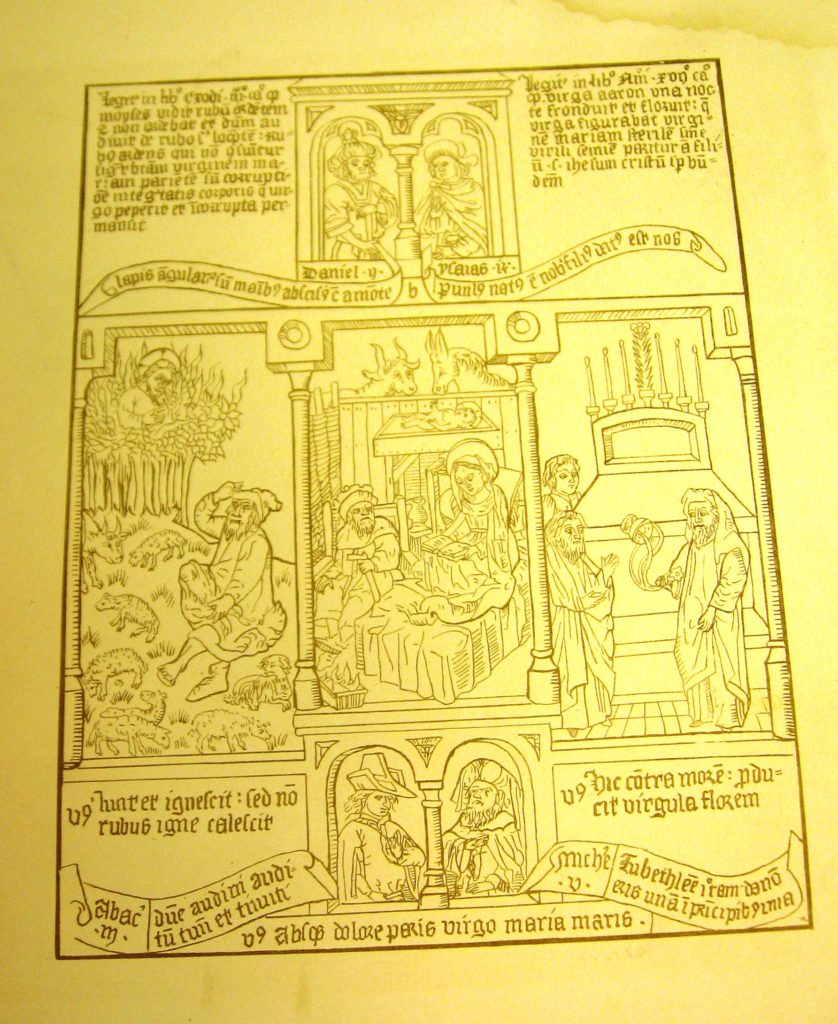 Nicholas de Lyra (1265-1349) was the most illustrious of all the medieval commentators on the Bible.  After the invention of Gutenberg’s printing press, de Lyra’s commentary was the first Bible commentary printed.  DeLyra believed the literal sense intended by the author of the Scriptural text  was the primary meaning of the text.  De Lyra’s illustrations of Ezekiel’s vision and of Ezekiel’s plan for the new temple and city were designed to help readers understand the text itself.

An illustration of Gospel writer Luke is placed at the beginning of the account of St. Luke’s life.  At Luke’s side is an ox, which had become an emblem of the writer of the third gospel.    During the middle ages, each of the Gospel writers had a particular emblem, derived from the vision at the beginning of  Ezekiel – an angel or man for Matthew, a lion for Mark, an ox for Luke, and an eagle for John. 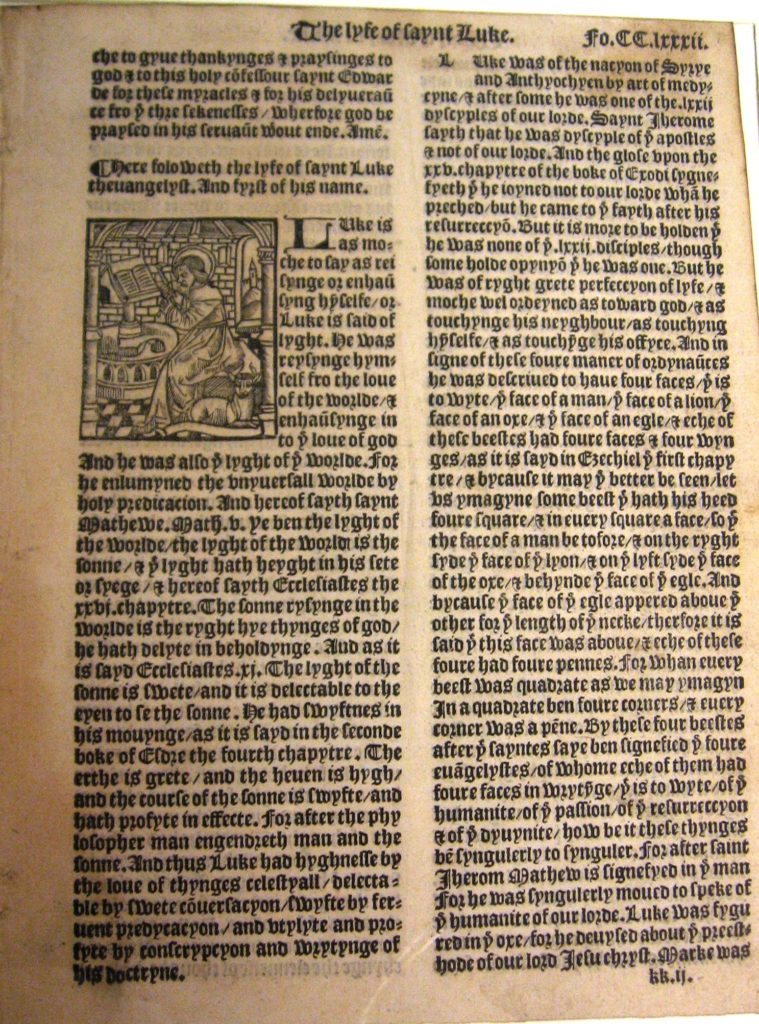 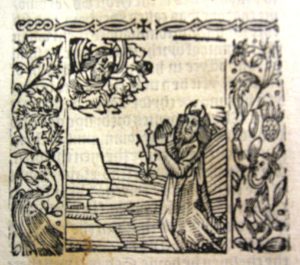 This illustration from the 1521 English version of the Golden Legend is of God talking to Moses (shown with horns) at the burning bush.  Though at the time it was illegal to print any portion of the Scriptures in English, William Caxton included a translation and adaptation of large sections of the Bible before the lives of the saints in the original Golden Legend.

Jacobus de Voragine, Archbishop of Genoa, first compiled the Golden Legend, a collection of lives of the saints, about 1275.  It was immensely popular and was translated into most of the vernacular languages of Europe.

William Caxton, England’s first printer, printed an English version of the Golden Legend in 1483.  The 1521 edition on display  was printed by Caxton‘s successor Wynken de Worde.  It includes 84 woodcuts illustrating the text.  Only about 10 copies of this edition are known.

About the time this book was printed in England, William Tyndale was on the Continent translating the New Testament into English.

Many of the depictions of Moses during the middle ages and Renaissance show Moses with horns.  This is based on Jerome’s mistranslation of the Latin Bible in the 5th century.  When Moses came down from Mt. Sinai with the tablets of the Law, Exodus 34:29 says, “the skin of his face was radiant.”  The Hebrew word “radiant’ is “karan.”  Jerome took the verb “karan” to be the noun “keren”, which means a “horn”.

Ancient Hebrew had no written vowels, so it might be possible to misunderstand the two words, but Jerome should have realized from the context that his translation was ridiculous. However, Jerome’s Latin translation (the Vulgate) that Moses “grew horns” became the accepted translation of the medieval church. Illustrations shown are of the Egyptian plagues of locusts and darkness from the book of Exodus.  The Historiarum Memorablilium contains 141 woodcut prints by Bernard Salomon (1508-1561), a foremost artist of the period.  Salomon created over 1600 book illustrations, but was most noted for his Biblical illustrations. Printer Jean de Tournes had Flemish scholar Guillaume Borluyt write verses for Salomon’s illustrations.  Borluyt’s verses were easy to memorize, and Salomon’s woodcuts inspired many later artists.

Illustrated are two scenes from the book of Exodus: Each picture is accompanied by a summary of the scene in Latin and an interpretation of the event in French poetry.  The  90 Old Testament illustrations in this work are by the noted Tudor artist Hans Holbein.  Many are copied from the Cologne Bible or earlier Bible pictures.  The verses are by the French poet Nicholas Bourbon.  Both received patronage from English Queen Anne Boleyn, King Henry VIII’s second wife (Bourbon called Anne “one of God’s beloved servants”) and were sympathetic to the Reformation.  Holbein became court painter for Henry VIII, surviving the fall of his patrons Thomas Moore, Anne Boleyn, and Thomas Cromwell. 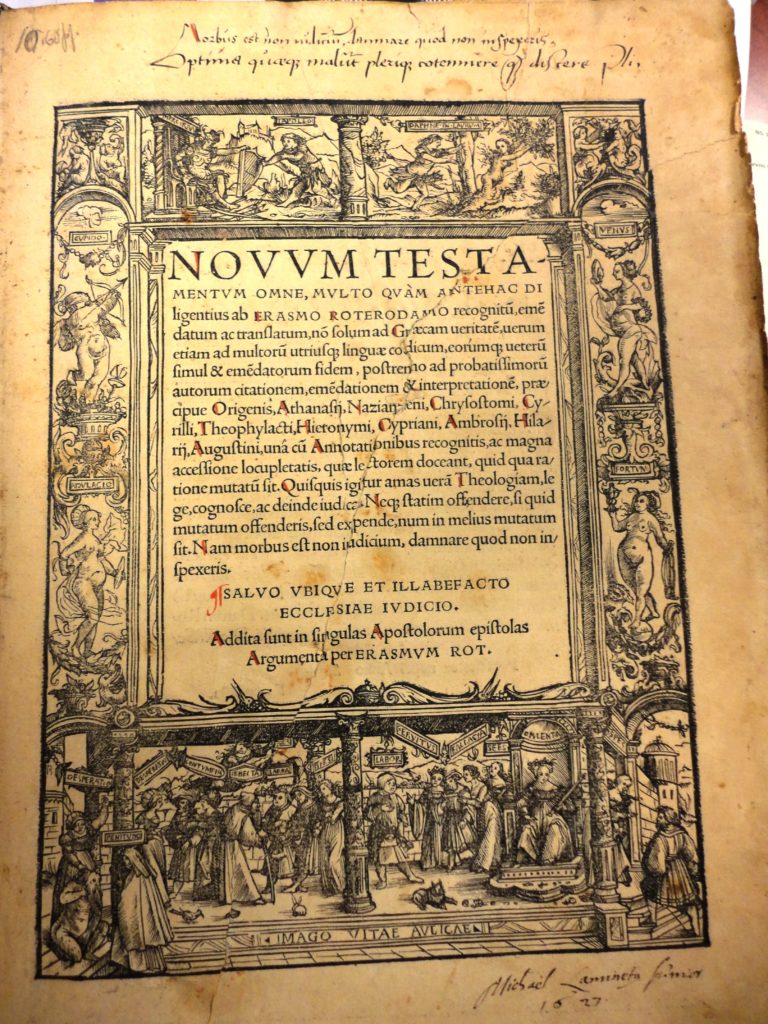 The title page of the second edition of Erasmus’ New Testament is not what one would expect for a Bible.  Cupid is shown on the left border; Venus on the right.  The top border illustrates the myth of Apollo and Daphne.  The lower border illustrates the “Calumny of Apelles.”  The woodcut borders were done by Ambrosius Holbein, brother of Hans Holbein the Younger.  Erasmus’ printing of the Greek New Testament, accompanied by his Latin translation, was part of the Renaissance return to the heritage of antiquity, which included Greek and Roman mythology as well as the text of the Bible. 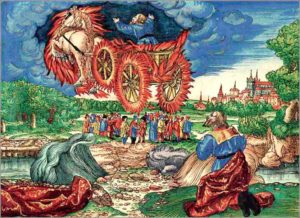 Martin Luther’s German Bible, first published in 1534, made the Bible accessible to the German people.  The first edition was vividly illustrated with 124 hand-colored woodcut illustrations from the workshop of Lucas Cranach, a Renaissance artist who embraced the Reformation and became a friend of Luther. 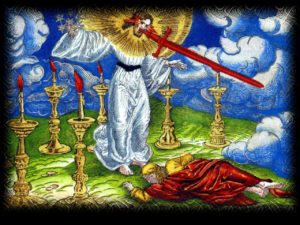 Here are the illustrations of Elijah ascending in a chariot and Jesus with a sword from his mouth from Revelation.

Biblia, The Byble: that is, the holy Scripture of the Olde and New Testament, Translated by Miles Coverdale. 1535. 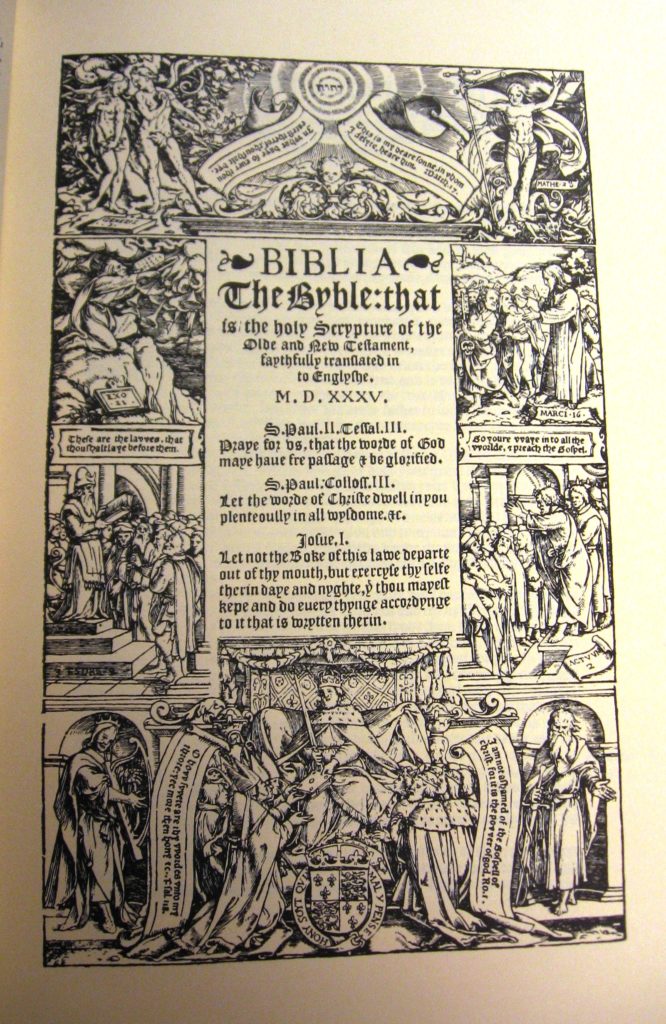 This first printed edition of a complete English Bible, and the first English Bible allowed in England,  had 68 woodcuts, copies of Hans Beham’s illustrations in a Bible published in Frankfurt.  The elaborate title page was designed by Hans Holbein the Younger and is similar in layout to the Biblia Pauperum.  Look closely and note these features:

This Bible was approved by Henry VIII for public use in the churches.  Both the images and Scriptures on the title page convey a definite royal message: the King had authority from God to give the Bible to the people. Notice these features: The Bishops’ Bible was a revision of the Great Bible made by Matthew Parker, Archbishop of Canterbury, assisted by many bishops and Bible scholars.  Some of the pictures throughout the Bible were copied from earlier Bibles, such as the Cologne Bible; others were new.  Many were greatly offended by the pictures which illustrated God the Father.  Following John Calvin, they believed pictures of God defaced His glory.   The picture at Isaiah 6, shown here, with Isaiah before the throne of God high and lifted up, was especially objectionable to many.  The interesting history of this engraving testifies to the connectedness of much of 16th century Bible printing.  Drawn by Virgil Solis for a Lutheran Bible published in Frankfurt in 1560, it was also used in a 1566 Dutch Bible published in Cologne, a Latin Bible published in Antwerp in 1570, as well as in this 1568 English Bishops’ Bible.

The Bible, that is, the Holy Scriptures conteined in the Olde and Newe Testament.  London: Christopher Barker, 1577 and Edinburgh: Alexander Arbuthnet, 1579.

In the 1579 edition of the Geneva Bible, the original frontispiece illustration of the Israelites’ deliverance from Pharaoh at the Red Sea is placed in Exodus, with a detailed explana tion of the event’s significance, summarized in 4 points:

The Bible, That is, the holy Scriptures conteined in the Olde and New Testament. London: Christopher Barker, 1599 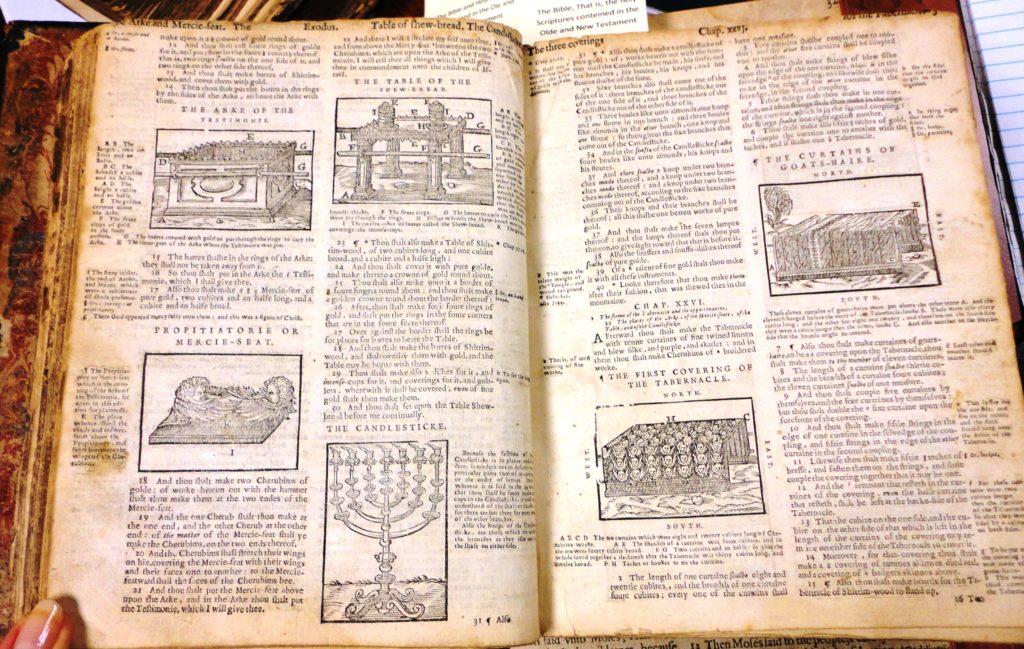 The Geneva Bibles contained detailed drawings of the tabernacle, its furnishings, and the clothing of the priests.

The Holy Bible, that is the holy Scriptures conteined in the Old and New Testament.  London: Christopher Barker, 1599

The Geneva Bibles also had several maps, including maps of