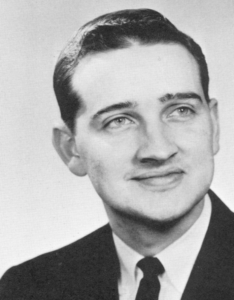 Few people have a richer history with Houston Baptist University than Dr. Don Looser. His involvement and attachment with the University began at the institution’s inception and carried on throughout the years. He authored the comprehensive book, “An Act of Providence: A History of Houston Baptist University,” published in 2010. A treasure of knowledge and a champion of the University, Dr. Looser well remembers the decades that formed the school. 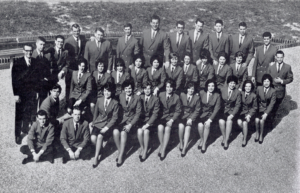 A native of Lufkin, Texas, Looser ventured as a college student to Rice and Baylor universities, and then on to Northwestern University in Chicago for his master’s degree in music. While there, he learned of a new Baptist institution being planned. “My dad sent me an article out of the Baptist Standard that a Baptist college was opening in Houston,” he said.

While still a graduate student in 1962, he interviewed for a faculty position at the newly formed Houston Baptist College, which would not accept its first students until 1963. In the fall of 1964, he joined HBC as an assistant professor of music. At that time, there were only freshman and sophomore classes in the new school. He initially taught piano and organ and accompanied the College Singers. 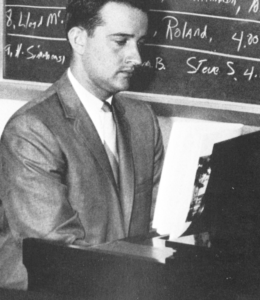 “We didn’t have any athletic programs yet, so the Singers were used to raise the visibility of the new college in the community. The first year, we performed 105 concerts all across the city.  Because many were for noon meetings of service clubs, the students unfortunately were out of class a lot,” Looser said.

The initial group of HBC students were particularly invested in the school, Looser remembers. They had taken a risk in trying a completely new higher education institution. As a result, they are among the most supportive alumni. “It’s intriguing why students elected to come because there was nothing for them to see when they were being recruited. At first, there was no campus, no curriculum, no faculty, and no student organizations; it was just bare dirt. They were really pioneers,” he said. “The same is true for the faculty that first came – they were operating on faith.” Most had come from positions of leadership at their previous colleges. 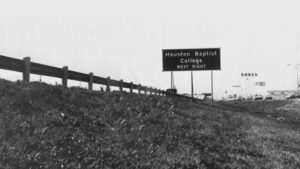 Like their students, faculty members also shared a special bond. Looser describes their offices as virtual closets lining a hallway in the administration building. “We worked closely with one another to ensure students would have the best curriculum and academic experience. The College required a double major and three years of interdisciplinary courses taught by teams of faculty. The degree program, capped off by two senior seminars, was innovative. Those first students credited these interdisciplinary courses as some of the most valuable aspects of their education,” he said. Faculty members worked together to write curriculum and sequence four years of degree programs. “Everything was new; you inherited nothing,” Dr. Looser said. “There were no forms, no word processing, and nothing like email or cell phones – it was telephone and typed notes. When you’re a pioneer, you have a sense of ownership from your own creative brand on it.” 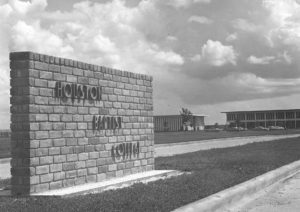 The critical-thinking skills required in the curriculum helped develop students who were especially capable. Graduates were impressive, earning high acceptance rates in graduate school and medical school. “The students were extremely literate in every sense of the word. They were broadly versed and competitive.” Hard work and the dynamic relationships with coworkers and students stand out from that time.

In 1965, Looser became engaged to Elsa Jean Albritton, a member of the College English faculty. “I was thrown in the quadrangle fountains just like the rest of the young guys who got engaged,” Dr. Looser said. “We were the first faculty couple to marry.” (In recent years, the beautiful, commemorative Looser Fountains were built in the Bettis Quadrangle honoring his many years of service.)

In 1967, the Loosers both took a year’s leave for Don to begin his doctoral study. He earned his doctorate at Florida State University while Elsa Jean was a member of the English faculty there. He returned to HBU as assistant to the president for Academic Affairs, charged with laying the groundwork for curricula and developing long-range plans for campus facilities. In one of his most lasting contributions to the University, Dr. Looser composed the music of the alma mater to a text by Dr. Hinton. Throughout the course of his tenure at HBU, Looser filled several roles supporting the University. He served as the founding dean of the College of General Studies, then vice president for Administrative Affairs, and finally, vice president for Academic Affairs from 1983 until 2007. 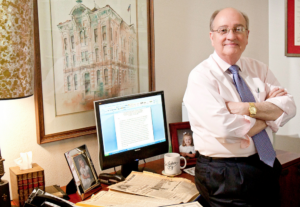 Around the time that former president, Dr. Doug Hodo, prepared to retire in 2006, Dr. Looser was also near retirement. Now a grandfather, he felt fulfilled when he reviewed the decades of his life and service. However, there was one project that he couldn’t get off his mind. He wanted to record the history of the University. Looser states in the epilogue to his book, “I felt we needed a written history. It had been such an intensive 50 years. It was a timely opportunity – integral people were still around to be interviewed, and the mantle came to me because I was virtually the last man standing. Dr. Hodo and I both felt the history needed to be written. He was a strong advocate for that, and then Dr. Sloan made the research and publication possible.”

At his retirement as academic vice president, Dr. Looser was named vice president emeritus of the University by the Board of Trustees. He stayed on at the University with Dr. Sloan for three years to thoroughly research and write the history of the University. He conducted interviews, combed through yearbooks, student newspapers, and committee minutes to gather both a historical and engaging account of the school’s history. He kept his extensive research notes in Excel format to facilitate access by future staff and researchers. 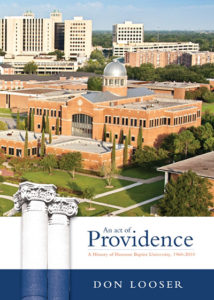 Dr. Looser wrote “An Act of Providence” in chronological order with the color of many stories infused. “The book is detailed and encyclopedic because we wanted it to be a reference to be used,” he said. “I tried to support everything in the book by crediting sources of origin.  Moreover, I wanted to make it a reflection of recorded history rather than my own personal perspective.”

True to history, there were moments in the University’s timeline that were challenging – financial shortfalls, disappointments, personnel issues, ideas that didn’t pan out – and moments that gave voice to multiple perspectives including those of alumni, faculty and board members. “There were negative things that happened, but the ultimate purpose was to relate them in a way that one can see the positive outcome later on,” he said. “We’ve occupied a unique place in the city. I think the people who have been a part of the campus have a very special kind of relationship and joint commitment.”

The finished book, published in 2010, is exceptional. Providing an enjoyable read and an important account, Dr. Looser captures the spirit of the University that continues to carry its mission today. “I think the title describes the creation and history of the school. It was providential. We’ve had very specific spiritual direction and a statement of mission from the outset of the institution based on the clarity of the original founders about what they wanted to build,” he said. “I do think fondly about our earliest trustees and our first faculty and staff. I have such respect for them because they committed to an idea and came here to invest themselves. I really entertain that thought frequently. I don’t think they would be surprised at all to see how the University has grown and developed enormously from its beginnings. And still, it is a family.”